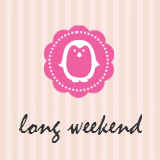 Sorry, this is going to be a long post of highlights of my activities over the long weekend last week…

Happened that a friend was in town last week, else I think I would have stayed at home throughout the weekend. Ha ha ha…yes, I’m lazy, but it definitely will be crowded everywhere. It has been more than 6 or 7 yrs since his last trip to Singapore, so many things have changed. Didn’t really bring him to lotsa places of interests. We went around for food & shopping, but he’s not really a shopping person. Luckily he’s also not really into tourist spots in Singapore too, should be very crowded due to the 4days break

6 Aug – Dinner @ Soup Restaurant
Don’t know where to go, so I gave some suggestions, eg. MBS, Esplanade, Vivo City. He chose Vivo City. Decided to go to Soup Restaurant, partly because I love their Samsui Ginger Chicken…he he he… Luckily he’s ok with it. Made a reservation so we don’t have to queue :p. The word “Queue” will drive us nuts. We ordered a set for 2, which comes with a “must-have” on every table: 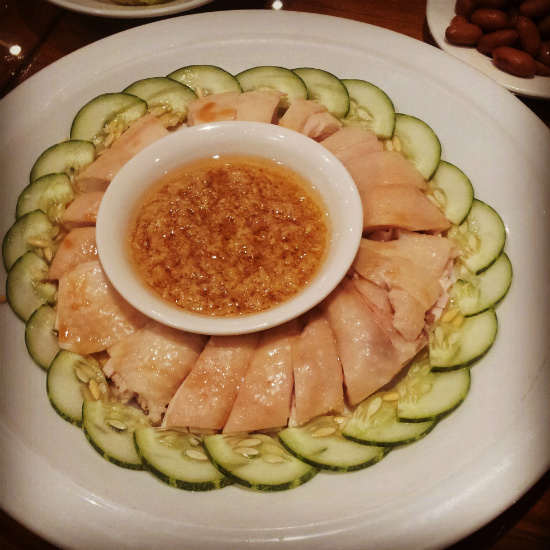 Finished dinner at about 930pm, went for a short walk. Most shops closed by 10pm. Went home at about 10plus as he has a meeting and I need to work the next day.

7 Aug – A Walk into Haji Lane
He he he…as usual, I’m usually late for my appointments. I reached Bugis MRT at 740pm when I’m supposed to meet him at 730pm :p Brought him to Haji Lane – a tiny lane with rows of small shop houses… Forgot to take pictures of the shops along Haji Lane. They really look nice. Just google “Haji Lane” and you should be able to see lotsa nice images uploaded by other users. Would love to go back again during day time for a walk.

Had dinner @ Blu Jaz Cafe. Used to go for drinks & dinner with JL when we were still working in the previous company. Food was alright and affordable, service was ok but sometimes you have to wave your hands real high to get the attention of the staffs. They have a live band performance too. Usually it will be packed by 8pm, luckily we managed to get a seat at 830pm. We ordered Grilled Chicken Chop, Seafood Platter with Rice, Calamari Rings and Mushroom Soup, Latte and Ice Lemon Tea. Total bill at $57.44, quite alright ya. My Grilled Chicken Chop ↓ 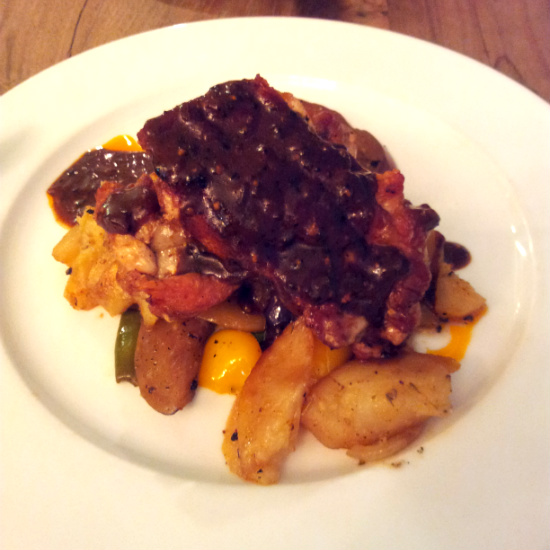 Went for another walk in Bugis Street after dinner. He visited the place when he was here and of course everything changed. It was renovated and there’s level 2 & 3 now… But somehow, it looks like one of the mall in HK.

8 Aug – A day being a tourist 😀
Initial plan was to meet at 1230pm to have lunch at Maxwell Market, go to RWS to visit the S.E.A. Aquarium and Night Safari at night. Ha ha ha…things don’t always go as plan. He worked till 6am, had conference call till 7am and obviously couldn’t wake up in time. We met at 330pm for late lunch at Maxwell Market instead. Suggested him to try the famous Chicken Rice (already famous but more famous after the Gordon Ramsay Challenge). The queue was long, so needless to say he skipped it. We had Laksa, Carrot Cake, Fried Hokkien Mee instead. Hm…the standard of the Fried Hokkien Mee dropped (forgot to stall name) 🙁

Took bus to Vivo City to take the Sentosa Express (light rail) to sentosa. WAH! I definitely will stay at home if he’s not in town. I usually avoid town or tourists spots during public holiday as it will definitely be packed. There are a lot of foreign workers, probably because they don’t have to work on public holidays. Felt like I’m in a can of Sardine…squeezed like MAD! It’s crowded everywhere… 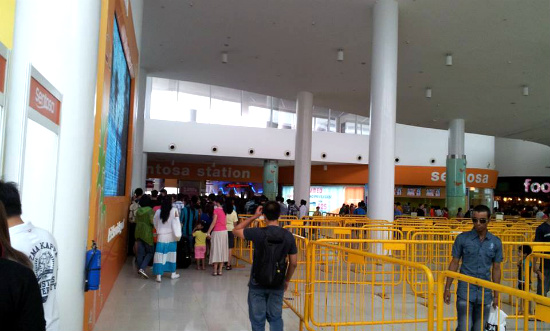 After all the squeezing, we’ve finally reached the ticketing counter at S.E.A. Aquarium. Speechless when we saw this board indicating the estimated waiting time: 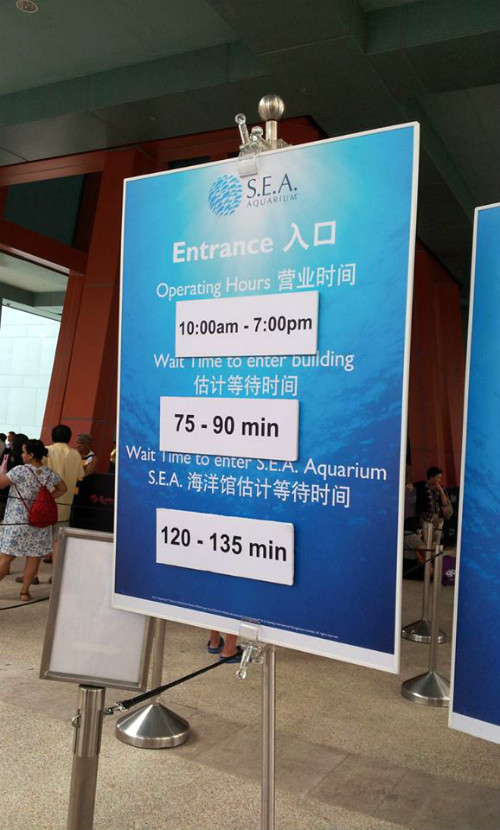 And the queue was SCARY!!!

I will take a day off on a weekday to come here again. The queue was scary! He went “WAH! Gotta wait for 3hours???” Ha ha ha… If I remember correctly, I don’t have to wait for that long while visiting any tourists spots when I’m overseas. Oh man… And of course we didn’t go in because no point going in for only a short while. We reached there at about 4plus, it closes at 8pm (usually at 7pm). We reckoned that we probably gotta queue till 7plus after the long wait, so really no point. We went for a walk around RWS (he left his passport in the hotel, so couldn’t go into the casino to have a look), took the light rail to Beach station, took the shuttle bus back to Vivo City after that.

He was looking for this particular pair of Nike shoe for his client. After trying the Nike store in Vivo City, we decided to try our luck at Wheelock Place. Took train to Orchard MRT and surprisingly it’s NOT crowded. Wonder where did all the people go during public holidays besides Vivo, Sentosa…ha ha ha… Anyways, it’s still not available in the Wheelock outlet. Had dinner at Bangkok Jam for dinner since there’s no need to queue. He he he… Yum Yum but slightly spicy for me. We ordered Seafood Tom Yum Soup ($7.90), Lemongrass Prawn Cake ($9.90), Seafood Phad Thai ($11.90), Kailan with Salted Fish ($10.50). Loved all the food we’ve ordered. We managed to finish everything (luckily I didn’t order the Fried Rice). Total bill was around $50+ too… Quite ok. 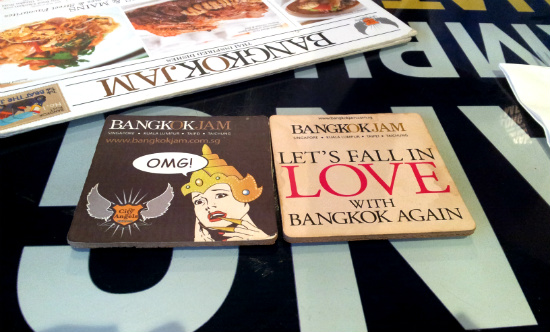 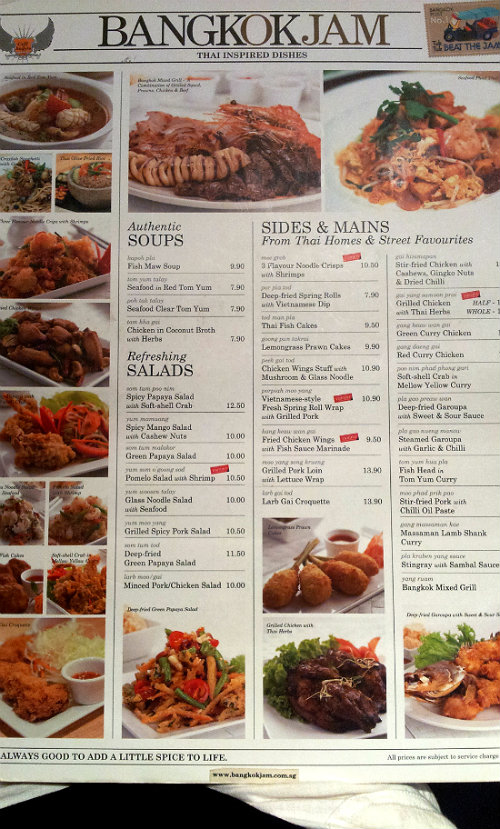 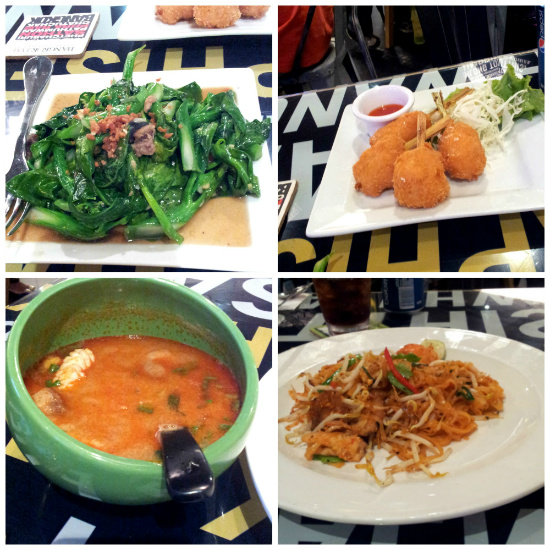 Headed to Sauce @ Esplanade after dinner (Went to Sauce previously as well. But they’ve changed their menu. I’d prefer the previous menu though). He came over at 10plus. Stayed there till about 1230am.

Tired, but had a great time catching up since we last met in 2011 when I was in HK. Looking forward to my HK trip in November 😀 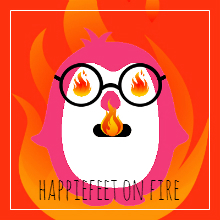 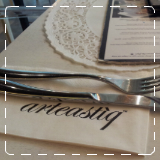 Tea or Painting? An arteastiq date with the mrs 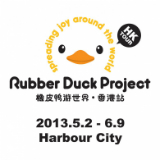