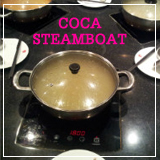 Woohoo, it will be Christmas Eve in another 30mins time, just a day away from Christmas. And we’ve also survived the 21 Dec 2012 end of the world thingy… Isn’t that great? Well…time for some new year resolutions planning and 2012 reviews… Shall go into that in another post…then again, not sure if I wanna draw some resolutions as I never keep to them…well…

Met up with the group for Xmas gathering dinner on Friday. Some suggested to have a gift exchange of ridiculous gifts. I’d rather not have any gifts exchange if we were to spend $10 on buying some ridiculous gifts. Some even suggested $10 worth of tissue paper, thanks ya. I think donate it to Charity will be more well spent. $10 may not be a lot, but it’s still money. I decided to do away with the gift exchange firmly :p Anyways, the dinner was confirmed at the last min. No one had any conclusion on where to dinner, after all the ding-dong messages to and fro. I called Coca Steamboat on Tuesday and thankfully I’m still able to get a table for 10pax for a Friday night. It was a surprised that the staff called me on Friday afternoon, saying that he will give me a VIP room for 10 of us. Excellent, we can have more privacy then.

The VIP room can accommodate 10-12 pax, great for rowdy crowds like us. It is rather quiet when the door was closed. Erm…we are not always rowdy, just occasionally :p When I reached there, J&A and him were already there. He asked if I requested for the type of soup I want when I called to make reservation, I was puzzled. Only then I know that the staffs arranged the soup for us. There’s 3 soup base to choose from, so the staff easily prepared one of each, ie. Clear Chicken Broth, Tom Yum Soup, Herbal Chicken Soup. Even though it’s an easy task, but it also requires some initiatives, isn’t it?

We usually ordered almost everything that’s on the menu (except beef, flower crab, jelly fish) for the first round and subsequently repeated orders for Meat, Fish Balls, Sotong Ball, Fish, Dumplings, Vege, Prawns, etc. In total, I think we’ve ordered 5 rounds of items.

Overall, service was good, food was fresh, but their only complaint was varieties…and most importantly, their favorite item was missing from the menu, ie. Pork Belly… For the price they are paying and varieties they are getting, they’d prefer King’s Laksa Steamboat (what I don’t like about that is the smell after that). Anyways, I’m quite happy with Coca Steamboat, especially in love with their Chili (definitely a must-have for me).

Well, no one suggested King’s Laksa earlier while there were several messages ding-dong to and fro with no conclusions at all.

Before we left, I managed to snap a photo of the Xmas tree in Ngee Ann City:

Bought a pair of flats while shopping for Xmas gifts for the gals on Thursday after work. Was wearing them on that day, think it’s not “seasoned” yet, kinda pain. 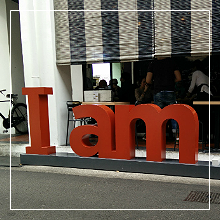 Lunch at I am… Cafe @ Haji Lane 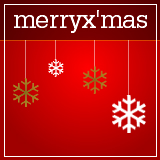