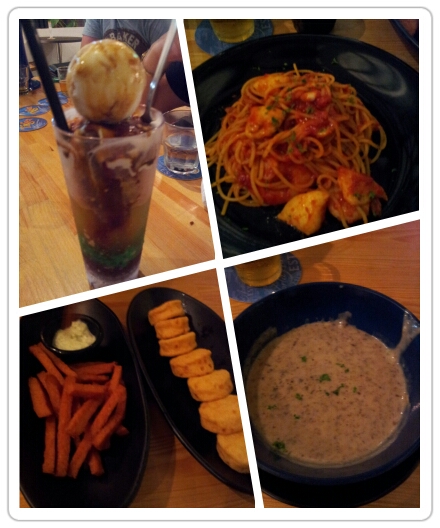 Have been wanting to try out this place when it first opened.  Finally, got to go there tonight.  They have big seating area, both indoors and outdoors.  Perhaps it’s on a weekday, the seating area on wooden deck area near the pond was closed.

Suppose to meet Eugene, him there.  Well, saw him with 3 other friends (sigh…his drinking kakis) when I reached there at 730pm…  They ordered some finger food as they reached there quite early.  Waited for Eugene & gf to reach before I ordered my dinner.  As usual, because I ended work quite late, I am famished.  Opened their menu, and there’s only 2 pages on food 🙁  I’ve decided what I want, thinking that it should be quite safe.  I ordered Mushroom soup, Seafood Marinara Spaghetti.  Eugene ordered his Chicken Chop with Garlic Mayo Sauce, Cheese Fishcake and Luncheon Meat Fries.

» Mushroom Soup
Alright but not fantastic.  Looks thick but not and it’s slightly watery for me.

» Seafood Marinara Spaghetti
big NO NO for me.  Not sure if I’ll  recommend this dish to my friend.  I’ve never taste anything like this, not to my liking at all.  It tastes totally different from the usual Seafood Marinara Spaghetti I’ve had.  Usually, should be rich of tomato taste, but it’s not in here.  And there’s slight burnt taste too.  Not sure if it’s meant to be like this in Wild Oats :p

Chicken Chop
»  Compared to my Spaghetti, this is better.  Chicken was tender and juicy, slightly oily for me.  But yummy with fries

Luncheon Meat Fries
» Served with lime & mayo sauce.  Luncheon Meat fries was so-so but the sauce taste weird to me.  Not sure if it’s the lime, it taste like Eucalyptus to me.  Good to go with beer but not with the sauce.  I had a better version of Luncheon Meat Chips @ Sauce, which was cut into thin slices as if you’re eating Potato Chips.  YUMMY!

Cheese Fish Cake
» Normal, not the type where you will find Cheese oozing out the moment you bit it.  Good for me, as I’m not a Cheese person.

Chendol
» His friend ordered this after a while, and it’s YUMMY.  Not the traditional type which you get outside.  It comes with the usual syrup and shaved ice, but topped with Vanilla ice cream & Gula Melaka.  Not bad, but it’s priced at S$6.00.

It can be a good place for chill, especially Punggol/Hougang area.  If given a choice, perhaps, I’ll have dinner at the coffee shop opposite and pop by for drinks. 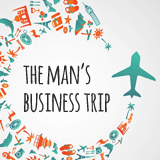